Any account of the National Park Service must begin with the parks that preceded it and prompted its creation.
The national park concept is generally credited to the artist George Catlin. On a trip to the Dakotas in 1832, he worried about the impact of America's westward expansion on Indian civilization, wildlife, and wilderness. They might be preserved, he wrote, "by some great protecting policy of government... in a magnificent park.... A nation's park, containing man and beast, in all the wild and freshness of their nature's beauty!"
Catlin's vision was partly realized in 1864, when Congress donated Yosemite Valley to California for preservation as a state park. Eight years later, in 1872, Congress reserved the spectacular Yellowstone country in the Wyoming and Montana territories "as a public park or pleasuring-ground for the benefit and enjoyment of the people." With no state government there yet to receive and manage it, Yellowstone remained in the custody of the U.S. Department of the Interior as a national park-the world's first area so designated.
Congress followed the Yellowstone precedent with other national parks in the 1890s and early 1900s, including Sequoia, Yosemite (to which California returned Yosemite Valley), Mount Rainier, Crater Lake, and Glacier. The idealistic impulse to preserve nature was often joined by the pragmatic desire to promote tourism: western railroads lobbied for many of the early parks and built grand rustic hotels in them to boost their passenger business.
The late nineteenth century also saw growing interest in preserving prehistoric Indian ruins and artifacts on the public lands. Congress first moved to protect such a feature, Arizona's Casa Grande Ruin, in 1889. In 1906 it created Mesa Verde National Park, containing dramatic cliff dwellings in southwestern Colorado, and passed the Antiquities Act authorizing presidents to set aside "historic and prehistoric structures, and other objects of historic or scientific interest" in federal custody as national monuments. Theodore Roosevelt used the act to proclaim 18 national monuments before he left the presidency. They included not only cultural features like El Morro, New Mexico, site of prehistoric petroglyphs and historic inscriptions, but natural features like Arizona's Petrified Forest and Grand Canyon. Congress later converted many of these natural monuments to national parks.
By 1916 the Interior Department was responsible for 14 national parks and 21 national monuments but had no organization to manage them. Interior secretaries had asked the Army to detail troops to Yellowstone and the California parks for this purpose. There military engineers and cavalrymen developed park roads and buildings, enforced regulations against hunting, grazing, timber cutting, and vandalism, and did their best to serve the visiting public. Civilian appointees superintended the other parks, while the monuments received minimal custody. In the absence of an effective central administration, those in charge operated without coordinated supervision or policy guidance.
The antique buttons are brass, click on image to enlarge
Posted by Peg at 3:26 PM No comments: 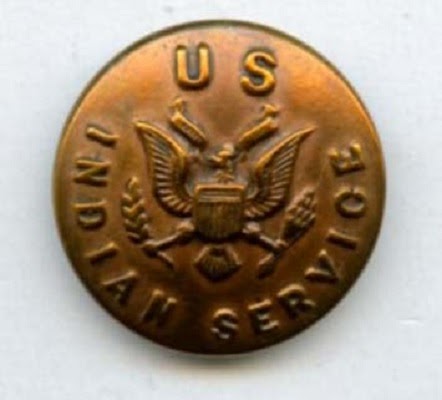 
Forest Service Buttons, first 2 are vegetable Ivory others are brass

Starting in 1876, and undergoing a series of name changes, the U.S. Forest Service grew to protect and utilize millions of acres of forest on public land. Gifford Pinchot, an early advocate of scientific forestry, along with President Theodore Roosevelt and conservation organizations, led the effort to manage forest for the public good.
Click on image to enlarge
Posted by Peg at 3:35 PM 1 comment:

Email ThisBlogThis!Share to TwitterShare to FacebookShare to Pinterest
Labels: U S Indian Service and U S Forest Service uniform buttons 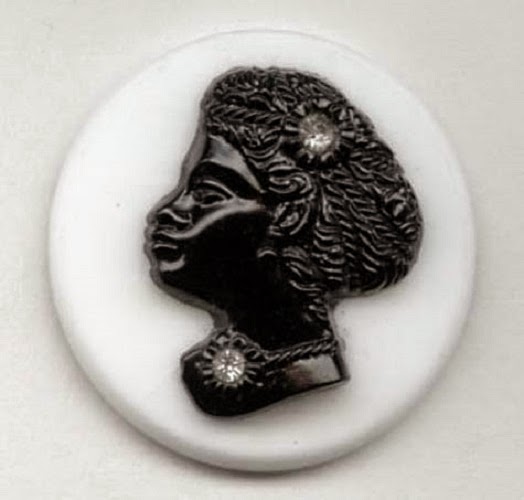 Ethiopian woman’s head button (this is according to the Big Book of Buttons) but I've also heard her called Hawaiian Queen, Lydia Liliuokalani
Molded black glass, set with 2 brilliants and cemented to a flat, milk glass background the button is large size, antique and has a metal rosette shank
I have found NEW information in the May 1997 issue of the National Button Society Bulletin the above image is called "The Blackamoor" and can be used as a fable button

“The button familiar to us as “The Blackamoor” can now be used with fable buttons. The fable is The AEthiop, page 91 in the AEsop Fable Collection. It goes as follows:
The purchaser of a black servant was persuaded that the color of his skin arose from dirt contacted through the neglect of his former masters. On bringing him home, he resorted to every means of cleaning, and subjected the man to incessant scrubbings. The servant caught a severe cold, but he never changed his color or complexion.
Moral: What’s bred in the bone will stick to the flesh”
Posted by Peg at 7:29 PM No comments: