April showers bring May flowers
here is my card I entered in a button show several years ago “Pansies and Violets” I have many different materials and thought my card was worthy of a ribbon..but instead I received a “measle” because in the third row 2nd button (which in the Big Book of Buttons states it’s a pansy) is actually a Hibiscus.
All are antique and vintage buttons
click on image to enlarge 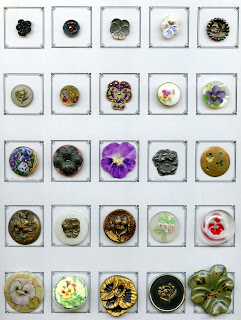 Email ThisBlogThis!Share to TwitterShare to FacebookShare to Pinterest
Labels: Pansies and Violets..Buttons 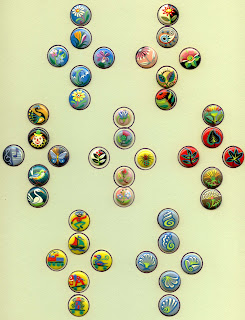 These are small plastic buttons designed and painted by Edith and Alan Brooks in England
Edith and Alan opened a “craft-workers” private business. Without advertising but through maintaining a high standard of workmanship, the Brooks gained recognition and sent buttons to many parts of the world. The had no interest in mass production. Just the 2 of them worked at a large table facing each other the design was applied using a fine sable brush “with points like needles” they painted the design straight on the button. They worked on six buttons at a time, sewed onto a card by Edith, Dab-dab-dab all the way down and then dab-dab-dab again all the way down-the same dab on each button. Thus the design grew
When American collectors became aware of the Brooks buttons they were imported from England in the 1960’s and 70’s
The Brooks didn’t just paint buttons they both taught embroidery at college, they sold their embroidery items, comb cases, spectacle cases and needle cases, they also made brooches, penchants and earrings. Brooches were painted similar to their buttons with tiny spangles sometimes embedded in the design. They made delicate flower groups on mother of pearl to fit into antique brooches to replace faded photographs of long dead relatives. Their items were decorated in enamels on mother of pearl, wood, plastics and various other materials, but the Brooks buttons are most sought after.
Both Edith and Alan Brooks have passed away, information about them and the buttons can be found in National Button Society bulletins:  February 1973, May and October 1989, December 1990 and December 1993 Just Buttons magazine June 1964 and November 1964 also see Carol C.'s wonderful Brooks study pages at
http://www.vintagebuttons.net/brooks.html
CLICK ON IMAGE TO ENLARGE
Posted by Peg at 10:25 AM 2 comments: