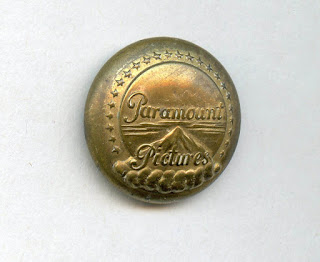 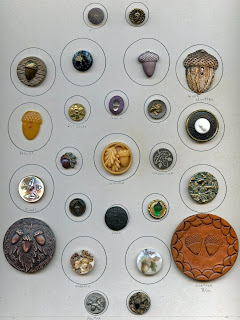 I received 3rd place ribbon for ACORNS at a recent button show
Judges comments: 1st place had movable and greater variety of materials.
They loved the oval fabric
click on image to enlarge
Posted by Peg at 4:20 PM No comments: 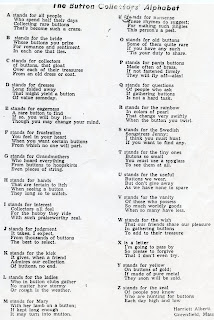 Click on image to enlarge
Posted by Peg at 4:52 PM No comments:

Email ThisBlogThis!Share to TwitterShare to FacebookShare to Pinterest
Labels: The Button Collectors Alphabet...POEM 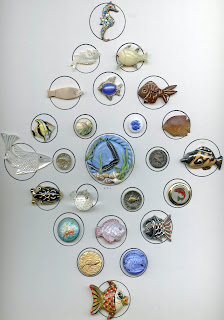 Some of my fish buttons, I  especially love the seahorse it is enamel on copper a studio button by Herman Lowenstein  made many years ago.
Click on image to enlarge
Posted by Peg at 4:14 PM No comments:

Email ThisBlogThis!Share to TwitterShare to FacebookShare to Pinterest
Labels: FISH..buttons 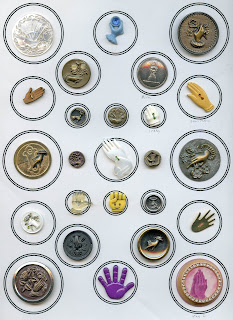 My card  I recently entered in our state button show
Award was written as OBJECTS specialized to the human hand
Look for hands to be involved in different activities
click on image to enlarge
Posted by Peg at 4:41 PM No comments: 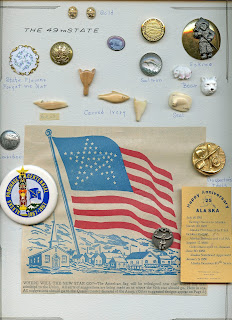 I acquired this card many years ago and recently acquired (and added) the HAPPY ANNIVERSARY 25 ALASKA card with the button (on the left) attached to it, a metal button marked Sterling on the back
click on image to enlarge
Posted by Peg at 2:01 PM No comments:

Email ThisBlogThis!Share to TwitterShare to FacebookShare to Pinterest
Labels: ALASKA..interesting card with BUTTONS 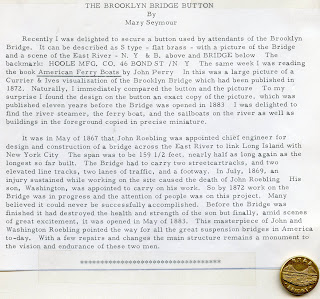 The button is brass with a N.Y. backmark
Click on image to enlarge 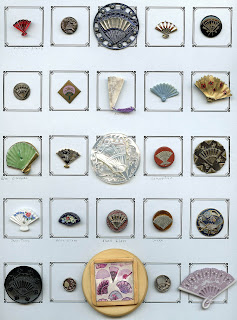 Fan buttons
Posted by Peg at 9:04 PM No comments: 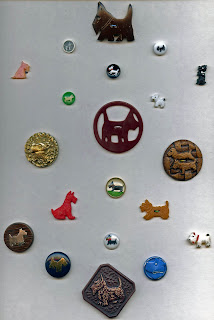 I have many cards of various breed’s of dogs but I have 4 full cards of just Scottie dog’s my theory why it is the most popular dog depicted on buttons is this
Fala (April 7, 1940 – April 5, 1952), a Scottish Terrier, was the dog of U.S. President Franklin D. Roosevelt.(he was pres. 1933 to 1945) One of the most famous presidential pets, Fala captured the attention of the public in the United States and followed Roosevelt everywhere, becoming part of his public image. Given to the Roosevelts by a cousin, Fala knew how to perform tricks; his White House antics were widely covered in the media and often referenced both by Roosevelt and his wife, Eleanor Roosevelt. Fala survived Roosevelt by seven years and was buried beside him. A statue of him beside Roosevelt is prominently featured in Washington, D.C.'s Franklin Delano Roosevelt Memorial, the only presidential pet so honored.
Posted by Peg at 2:37 PM No comments: 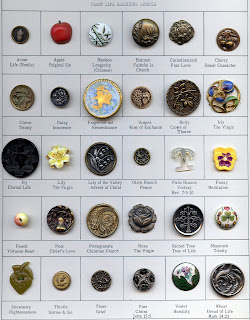 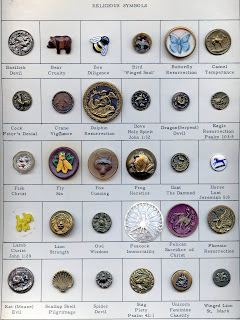 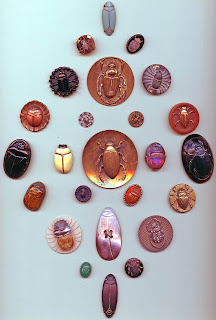 Some of my Scarabs and other beetles..buttons
Click on image to enlarge
Posted by Peg at 4:33 PM No comments:

Email ThisBlogThis!Share to TwitterShare to FacebookShare to Pinterest
Labels: Scarabs and other beetles..buttons 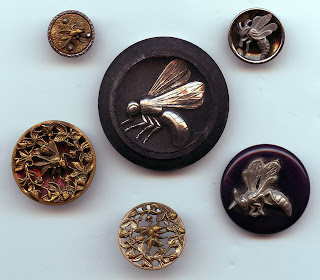 Mosquito: A biting bloodsucking insect
Posted by Peg at 5:05 PM No comments: 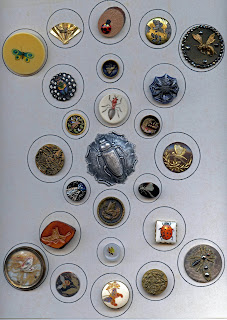 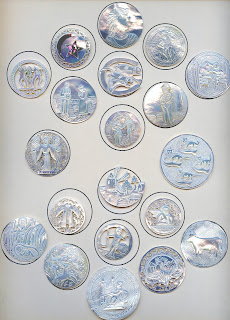 Just button magazine Sept. 1957
“From the Holy Land”
The following story may very easily describe the pearl buttons brought to this country, 1945-50 by Mr. Henry Golding
There are several in the Just Buttons Museum, a gift from Mr. Golding in 1950
“In the wide –eyed amazement we watched the skilled artisans drilling holes (with tools dating back to the eras of the Crusades) in the Mother of Pearl shells and beginning to scoop out the pattern (without even first sketching in the design!)
After literally hundreds of tiny strokes with a crude chisel, the design began to take shape and we held our breath at the last of a thousand or more scooping's. Only one slight miscalculation and the piece would be ruined.
It was no surprise to us to learn that such highly skilled artisans are few in number. Every year young hopefuls apply at the atelier determined to achieve the exalted status of Master Artisan--a mush coveted craft distinction won only after three long years of grueling apprenticeship—resulting in the fabled wage of $3.00 a day!  But no more than two or three out of ten apprentices will make the grade. The unsuccessful aspirants are destined for the less demanding tasks of carving beads and sculpting undistinguished jewelry for the local market”
Mr. Golding sold these buttons by ads in the JB magazine from 1946 through 1952 then they were sold exclusivity by Sally Luscomb for several years then late other button dealers sold them
The buttons are still being sold today BUT the workmanship carving’s are not like the older ones
---------------------------
Click on image to enlarge (buttons are much nicer than the image shows)
Posted by Peg at 11:09 AM No comments: