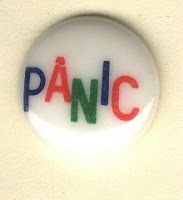 A popular saying in the 1970's, a time of political unrest and disillusionment, was, "don't push the panic -button"

for sale in my button store (under the plastic category
@ Pegs Buttons
Posted by Peg at 4:20 PM No comments:

Animated cartoons were an important part of the movie-going experience. Whether as the feature, or as short fillers between motion picture, newsreels and popcorn advertisements, they were wildly popular. The brand-new film animation companies quickly learned-as was the case with radio serials-that characters with ongoing storylines kept the public returning to the theaters for more.
The cartoon industry was the provence of the limited number of companies. Warner Brothers did the Looney Tunes,(see the 10 buttons together above) starring a number of favorite characters , although Bugs Bunny could be called the leader of the pack. Woody Woodpecker had his own following as well. But no other cartoon character has ever had the success of Mickey Mouse, from the Walt Disney Corporation.
from ABOUT BUTTONS BOOK by Peggy Osborne
I have a few cartoon character buttons available in my ecrater button store under the plastic category
@ Pegs Buttons
Posted by Peg at 4:49 PM No comments: