Queen Victoria was born in 1819, she became queen in 1837 at the young age of 18. In 1840, she married her first cousin, Prince Albert. They had 9 children together. Their marriage life was ideally perfect, but the bright and happy years were doomed to a tragic ending. His untimely death (after a sudden illness) in 1861, just months after the death of her mother, left her devastated and she went into a deep mourning that would last for the rest of her life.
She took to wearing black jet buttons on her somber black costumes, a habit her subjects and others around the world took to. The scarce supply of true jet brought about its imitation..BLACK GLASS.
----------------------
Sometimes you find antique/vintage cards of black glass buttons which are labeled JET..they are NOT..jet refers to the color as these are black glass.
"The Victorian Era" 1837-1901..Queen Victoria died in 1901

I have a variety of black glass buttons for sale under the black glass category @ Pegs Buttons
Posted by Peg at 3:56 PM No comments: 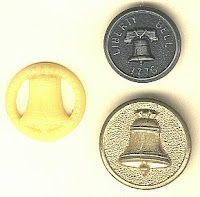 The most famous bell in the U.S. is the Liberty Bell. It was cast in England and brought to America in 1752. It weighs 2000 pounds. During its first trial it cracked. It was recast in Philadelphia, but cracked again when it was used. A second recasting was necessary. It was hung and rang to peal out the beginning of our new nation on July 8, 1776.
When the first chief justice of the Supreme Count died in 1835, Liberty Bell was rung again, but it cracked once more and could not be recast. In preparation for the centennial of the U.S. in 1875, a replica weighting 13,000 pounds was cast and then hung in the tower of Independence Hall. With its large crack it can now be seen on a pedestal on the first floor of the Hall.
The vintage Liberty Bell buttons(above)2 brass,1 plastic are available under mixed materials @ Pegs Buttons
Posted by Peg at 4:30 PM No comments:

Beatrix Potter was a lonely girl living in a quiet townhouse in London in the late 1800's. Her father was a prosperous lawyer and he and his wife were caught up in the hectic social life of Victorian London. Beatrix was their oldest child and kept herself entertained by reading, drawing pictures, and making up stories.
The family spent every summer in the country, so Beatrix developed an early interest in nature and woodland creatures. She and her younger brother often kept pets and often spent hours observing and drawing pictures of their animal friends. Beatrix was encouraged in this regard by her parents and soon became an accomplished illustrator.
As a young woman, Beatrix began writing illustrated letters to amuse the children of her friends. Thus were born Flopsy, Mopsy, Cottontail, and Peter along with a host of other endearing characters which has become part of one of the most popular children's storybook series in the world.
The Tale of Peter Rabbit was first published in 1900 and has since been translated into fifteen languages.
In recent years, the endearing characters have been popular choices on BUTTONS and bring to mind many memories of our own childhood.
The B.Potter buttons I am showing here are plastic and available in the plastic category @Pegs Buttons
Posted by Peg at 3:30 PM 4 comments: 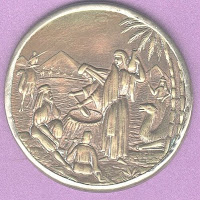 As I was looking for the Angel of Peace button to show you (below)..I noticed this one, it appears to be Rebecca and Eliezer (and others) at the well.
I can't find this button in any of my button books..I can't tell if its copper or brass but is set in sterling silver.
AMAZING DETAIL!
Posted by Peg at 3:08 PM No comments: 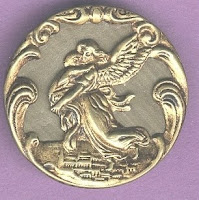 Memorial card for a small child.

Angel of Peace button, from a painting by Wilhelm Kaulbach(1805-1874)
Button is antique, brass with wood background.

Email ThisBlogThis!Share to TwitterShare to FacebookShare to Pinterest
Labels: Angel of Peace Button

Cloud: A visible body of very fine droplets of water or particles of ice dispersed in the atmosphere above the earth's surface at various altitudes.
Button is a modern plastic.
This concludes my study of the Heavens
Posted by Peg at 2:51 PM No comments: 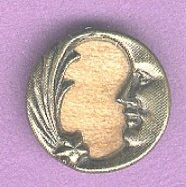 COMET: The most mysterious member of the solar system. A comet shines partly by reflected light, partly because sunlight causes their own gases to glow.

Antique button, brass with wood background
Posted by Peg at 10:54 AM 2 comments: 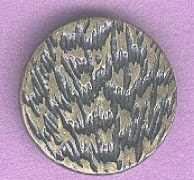 AURORAS: High altitude, many colored, flashing luminosity visible in the night skies of polar and sometimes temperate zones, and thought to be caused by injection of charged particles of solar origin, into earth's magnetic field.
The button is antique,brass and available in the metal category @Pegs Buttons SOLD
Posted by Peg at 9:45 AM No comments:

Rainbow: A solar spectra formed as sunlight passes through drops of water. Airline pilots have said rainbows can be a complete circle.
Posted by Peg at 4:06 PM No comments:

Crescent moon and Man in the Moon Buttons

THE MOON: A natural satellite of earth visible by reflection of sunlight having a slight elliptical orbit, etc. The moon is any natural satellite revolving around a planet.
Posted by Peg at 1:29 PM 2 comments: