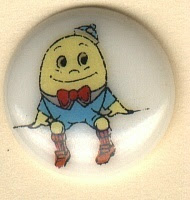 Humpty Dumpty was a egg, famous in France, Germany, Sweden, Denmark, Finland and Switzerland. The term Humpty Dumpty is given in the Oxford English Dictionary as the name for a ale and brandy drink of the late 17th century. Also, it means, a short clumsy person of either sex. Over the years the name Humpty Dumpty has been used for a game played by little girls.
This small plastic button is available(under the plastic category
@ Pegs Buttons
Posted by Peg at 4:37 PM No comments: 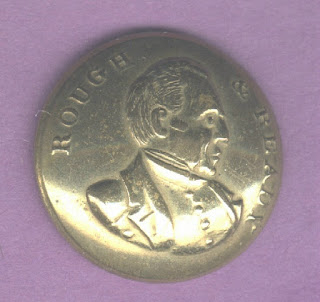 Zachary Taylor (November 24, 1784 – July 9, 1850) was the 12th President of the U.S. (1849-1850) Known as "Old Rough and Ready," Taylor died just 16 months into his term, the third shortest tenure of any President. Only Presidents William Henry Harrison and James Garfield served less time.

This antique button is brass with a tinned back. The light color is scanner glare.
Posted by Peg at 2:52 PM No comments: