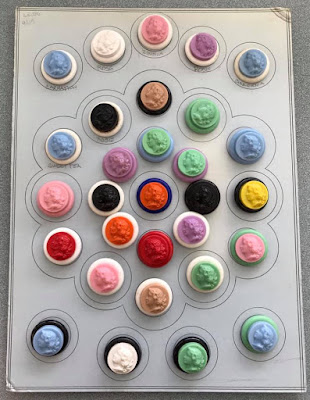 Colt rouge container buttons
These are amino resin made for a short time in the 1940's by the plastics division of the Colt Firearm Company
The Cameo embossed lid screws off. Originally these were filled with rouge or perfume. When empty, the mark "COLT" may be seen inside the container
These are all Colt buttons. The ones in the top row plus the first two in the second row are all Colt Perfume buttons. I’ve noted the perfume fragrance under each of the seven buttons.
They are each stamped in black with the name on the back of the button. Some of the Perfume buttons have solid perfume in them and some still have a scent, a very old scent
The remaining buttons are all Colt Rouge buttons  — no names on the back and some of these still have rouge
Card belongs to
Elaine Cossman long time button collector, button dealer at state and National shows
She started this collection in 1992
This is her work card. It’s recycled and isn’t pristine. No thought was given to placement except for keeping the perfume buttons together and the Rouge buttons together.
-----------
Elaine thank you for permission to post this AWESOME card
-------------------
From the Big Book of Buttons
a short-lived novelty button made about 1945. The small, plastic rouge container has a screw-on top decorated with a molded cameo- style head.
The lower part of the container is fitted with a plastic shank
First Big (blue) Book printed in 1981 and reprinted (red) in 1991 valued the button at $4
The new (2 volume-red) Big Book the price guide values it at $40-$60