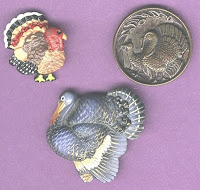 Turkey buttons are extremely rare..I only have 3, first is a modern plastic, second is a antique 2 piece brass and last is a Arita porcelain.
---------------
Legend has it that if Ben Franklin had had his way, the turkey would have been our National bird. It seems that on July 4th 1776, the Continental Congress resolved that Dr. Franklin, Mr. Adams and Mr. T. Jefferson form a committee to prepare a device for the seal of the new U.S. of America.
Although Dr. Franklin had strong feelings about the turkey since he was a native bird, his idea was overridden by Mr. Jefferson and Mr. Adams who felt the Americal bald, or white-headed, eagle more nearly symbolized the solidarity they wished to convey in the national seal. After all, the eagle had been used since antiquity as a symbol of strength and freedom. In contrast, the turkey was not known for bravery and was known for its unwillingness to fly - and even then only in short bursts of flight!
The turkey has a strange history. It is a native of the North American continent; however, the Indians were superstitious about the bird and did not hunt it for food. The Spaniards found it in Mexico and took it back to Europe in the 16th Century, where it was domesticated. It became very popular in England, where it was named Turkey-Cock after the Guinea fowl of Islam or Turkey. When the Pilgrims came to Plymouth in 1620, they brought the turkey back to its native land.
Technically, the turkey is of the pheasant family (order of galliformes in the meleagridae gallopavo). The fleshy growth on the front of the throat is a snood or dewbill; the pauch-like area at the front of his throat is a wattle; the small reddish growth of skin at the base of his throat is the carancle. The male of the species is a tom; the female is a hen, and the young turkey is a poult.
And so, even thought the turkey lost his opportunity to become our National emblem, he has become dear to the hearts and stomachs of Americans as the symbol and star of our Thanksgiving feast.
my thanks to the late Freddie Speights for this article published in the N.B.B. 1984
Posted by Peg at 3:11 PM 3 comments: 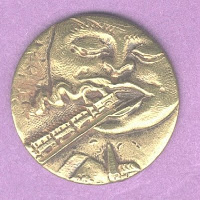 The button and this article are in the National Button Society bulletin May 1946.
--------------------
The story of transportation may be said to be the story of civilization. In these modern times the world has become criss-crossed with railroads and steamship lines and motor highways and air routes and man has begun to understand how transportation has enriched human life. Without these facilities as we know them today, there could be little progress.
England had the satisfaction of opening the first railroad over which passengers and freight were carried by a locomotive. The U.S. was not far behind, experimenting in several parts of the country between 1827 and 1838. France developed its system in 1842; Belgium and the Netherlands followed but Germany, Austria and Russia were somewhat behind the Western nations in their railroad development.
The moon in all of its phases, together with the "Man in the Moon" has always been a popular theme in verse, song, story and picture. And it seems that the designers for our buttons must have found it appealing also since the subject was used either alone or in combination with scenic views or other celestial bodies.
This button picturing a locomotive and passenger cars entering the secondary planet, the MOON, with a mere glimpse of EARTH some 237,000 miles away is one piece brass, antique.
Posted by Peg at 11:48 AM No comments: