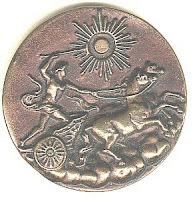 This is an old identification, although some feel that the title of Apollo would be just as suitable. Phaethon was the son of Apollo by the nymph Clymene. Tormented by the taint of illegitimacy, Phaethon begged his father to let him drive the sun chariot to prove his paternity. However, the youth could not control the plunging horses and lost control of the chariot, letting it come to close to the earth, so that the green fields were scorched and the forests were set ablaze. Zeus was forced to intervene to save earth from destruction. He hurled his thunderbolt at the boy, Phaethon fell to the ground, and the maddened horses plunged into the sea.
SOLD: This handsome brass button is available in my ecrater button store under the METAL category
@ Pegs Buttons
Posted by Peg at 3:27 PM No comments: 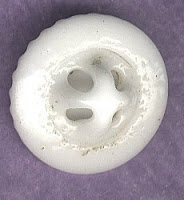 What is this shank you call a "bird cage?" you may be asking, "what kind of buttons have them?". Actually the button itself, as well as the shank, is called a bird cage.
The buttons are made of two (in some shapes three) separate pieces. The cap is dish-like with large mouthed opening on the under side. The shank portion (a hollow cone pierced by four slits) fits over the opening like a lid.
The above are not for sale but I just listed several, they are
available in my ecrater button store under the CHINA category
@ Pegs Buttons
Posted by Peg at 4:25 PM 2 comments:

Button collectors call these bull's-eyes..they are a gaiter button, dome shaped with a metal loop shank and plate.
There are 15 different Bull's-Eye patterns on gaiter buttons.
They are from the late 1800's.
The above are not for sale but I just listed several, they are
available in my ecrater button store under the CHINA category
@ Pegs Buttons
Posted by Peg at 3:52 PM No comments: 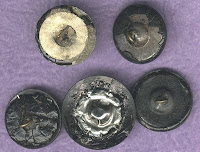 A clear glass unrimmed face disc which may be convex or flat and which may or may not have a beveled edge: it has a wide metal shank-plate fastened to the front disc, with black adhesive material: a pattern (sometimes hit or miss) which must be inserted between the glass disc and the shank plate, never on the observe side of the disc.
These are very fragile buttons..believed to be dated between 1840-1870.
The largest button someone has repaired with a self shank. The transparent blue glass with pearl chips is constructed the same as the others. Click on picture to enlarge.
Posted by Peg at 8:51 PM No comments: