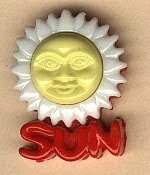 SUN: A star that is the center of a planetary system.

This button is a modern plastic snap-together.
I have over 200 snap-togethers @ Pegs Snap Buttons
Posted by Peg at 1:06 PM No comments: 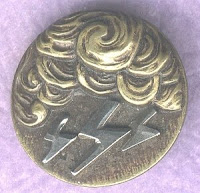 Lightening..The visible body of very fine droplets of water or particles of ice dispersed in the atmosphere above the earth's surface at various altitudes.
Posted by Peg at 8:44 PM No comments:

When Christmas comes and soft lights glow
And Santa's reindeers trip the snow
My stocking I'll hang by the chimney so near,
And listen for sleigh-bells I'm waiting to hear.
Just hoping and waiting for Santa to plop
The buttons I'm wanting, right into my sock.
There's "Friday" "Red Riding Hood" "Moses and Lind"
That jolly old Santa will surely put in--
There's paperweights, calico--old cloisonné
Or copper or pewter or papier mache
I could go on forever and ever to say
The buttons I want to receive Christmas Day. 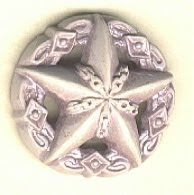 A celestial body visible at night from earth as relatively stationary, usually twinkling point of light.

Many star buttons are available @ Pegs Buttons
Posted by Peg at 2:48 PM No comments:

Who made the first snowman? Where did it originate? How was it propagated?
--------------------------
It's a well-documented fact that very first snowman was made in Eau Claire, Wisconsin on January 7, 1809 by a Mr. Vernon N. Paul and his nine-year-old daughter, little Yetty Paul. According to Mr. Paul, he told his daughter that the snowman was intended to frighten away the Boxing Day elves. (Popular legend said Boxing Day Elves reclaimed Christmas presents.) Once the Paul family's neighbors saw the snowman, and little Yetty explained to her friends how easy it was to make (and no doubt, how effective it was at keeping the Boxing Day elves away), children all over the town were making snowmen. Word soon spread and the New York Times dispatched a writer named Hillary Sherpa to check out rumors of a town populated by snowmen. Of course, she found that Eau Claire was not really populated by snow people, but instead, effigies of people, made of snow, "seemed to virtually populate every corner of the town." According to the Ms. Sherpa's article, even though the snowmen and snowwomen "had an appearance bordering on abysmal, indeed abominable, even" the trend caught on and soon spread nationwide by the eve of the Civil War. When war broke out in South Carolina in 1861, the Times of London (and a host of other international newspapers and news reporting agencies, including Berlin's leading newspaper, Der Kruller) came to the US to report on the war. The TRime os London actually was the first international newspaper to pick up a story on the tradition of snowmen, more as a human interst story than anything else. And as they say, "the rest is history."
Source(s):
http://www.nytimes.com/ref/membercenter/…

P.S. I found the above information at google. I personally think the first snowman wasn't recorded.
Posted by Peg at 3:08 PM 4 comments: