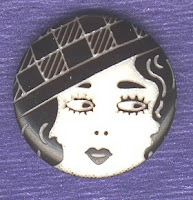 This is a modern plastic button. The button design was cut by using a laser light source.

Here are a few tidbits picked up from Google:
--Light Amplification by Stimulated Emission of Radiation. A device that produces coherent light with a narrow range of wavelengths.
--optical device that produces an intense monochromatic beam of coherent light
--A powerful beam of light used in some types of surgery.
--Lasers work as a result of resonant effects. The output of a laser is a coherent electromagnetic field. In a coherent beam of electromagnetic energy, all the waves have the same frequency and phase.
--Lasers are one of the most significant inventions developed during the 20th century. They have found a tremendous variety of uses in electronics, computer hardware, medicine, and experimental science.

Laser cutting has been used on several button materials, including polyester, vegetable ivory, pearl, and possibly others.

If interested I have several of these buttons for sale in black or red in my button store (under the plastic category
@ Pegs Buttons
Posted by Peg at 10:13 AM No comments:

'V' for Victoria. There were two periods when buttons were rife with 'V' designs: first during Victoria's reign, and later at the end of World War II when the 'V' stood for Victory. The first one shown here dates 19th century, ('V' for Victoria) engraved brass with cut steels..a double 'V'. The others are World War II ('V' for Victory) 2 are plastic and 2 metals..notice the Morse Code.
Click on picture to enlarge
Posted by Peg at 7:39 PM 1 comment: