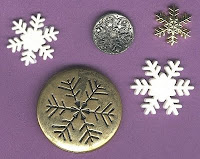 According to the World Book Encyclopedia: Snow always appears as tiny SIX-sided crystals, and that no two are alike. Some crystals are flat; at other times they form long needles. Snow crystals may cling together to form snow pellets over an inch thick.

Some snowflakes are like stars, but they have to be SIX-pointed stars because snow crystals are basically hexagonal. Compton's Pictured Encyclopedia states: "Although they vary greatly in details, snow crystals all belong to the hexagonal system; that is they all have SIX sides or angles". Actually, the patterns that we call snow flakes are more accurately termed snow crystals.

The tiny crystal surfaces of fresh snow reflect light and make the snow appear white. However, microscopic plants may change the color of the snow after it has fallen. Greenland and other places in the Arctic sometimes have red or green snow on the ground. In Just Buttons ( 63/68) it mentions that red, green, and even black snow has been known to fall - a phenomenon caused by fungi or dust particles around which snowflakes have formed; that snow may be red or green because of air pollution.

While the first snowflake drawing was made as early as 1555 by Archbishop Glaus Maghus of Uppsala, Sweden. The real pioneer in the field was Wilson A. Bentley of Jerico, Vermont. In a period of fifty years, he made over 6000 plates of snow and ice crystal formations.

It is interesting to note the changes over the years, in the vehicle known as the bicycle. This evolved from the oldest form called a velocipede consisting of 2 or 3 wheels. It was propelled by the rider sitting astride and peddling the machine forward with a geared treadle connected by a chain to gears in the axle of rear wheel. This form of vehicle dates from the earliest part of the 19th Century. One of the oldest had 2 wheels of nearly equal size, placed one in front of the other. Others had a very large wheel in front and a small one in the rear. These had a treadle or a crank on axle of the front wheel for propulsion. The term of velocipede was soon changed to bicycle.

Other types of pedaled vehicles were known as tricycles because of the 3rd wheel added. One wheel was placed in front and 2 in rear or reversed. There is a unicycle made with only 1 wheel, used mostly by trick riders. One vehicle, also called a tricycle was a coach with 1 wheel in front and 2 in rear. It was pulled by 2 horses and as many as 20 people could ride.

In olden days, bicycling parties were a delightful form of entertainment.
Cycling was more than a sport, it was a mode of needed transportation.
The cost was high - from $100 to $150 and that was a lot of money then.
There were 7573 patents issued up to 1900 for bicycles or parts.
A man named Albert Pope was known as the father of the bicycle.

The so called "Boneshaker Bicycle" was used about 1866. It is depicted on a button with an English Registry mark dated July 2, 1869. Many buttons were made showing different types of bicycles some with riders and some without riders. One shows a "Bloomer Lady" with her cycling costume, typical of the 1849 - 1950 era. Cord coats were made for cycling. Other types of costumes adapted to riding were the divided skirt, culottes and pedal pushers.

Buttons with bicycles are found in many materials including composition, rubber, pearl, black and colored glass. Also, metals, enamels, horn, underglass, and plastics. They show men and women riders and even such unlikely riders as cupids and birds. As the bicycle changes occurred so did the button makers designs, which helps to date the button.

With the growth of the Automobile Industry, the Bicycle Industry declined. However, during WW II people were encouraged to use bicycles to conserve gasoline. The Army used them in some units. The price was reasonable and the business boomed.

Some interesting stories are found in researching - one of a gold plated bicycle ridden by Lillian Russell. Traffic jams were caused as she rode on the streets.

In European, Asian and Scandinavian Countries, bicycles are much more widely used than in our Country. They are used not only as transportation for people but to move supplies and tools. Produce and all sorts of cargo are hauled. A friend told of seeing 2 painters with a pole on their shoulders, on which was suspended several buckets of paint and a bucket with brushes, seen riding on a busy street in Holland.

In China, a richshaw is used to transport people. Once pulled by a man running, now a bicycle is used.

In the past year bicycles with trailers have been seen, some with bed rolls and tents on them. One seen lately had a covered trailer with a small child snuggly seated inside.

It would be interesting to see how many buttons with bicycles could be found. Tricycles can be found on modern buttons and there are some realistics.

When it's all said and done, the bicycle was a good invention, there really has not been much change - 1 wheel in the front and 1 wheel in the rear - and such great and wonderful things it has caused to be done.

written in 1988 by Irma Shoop
several issues of National Button Bulletins were used as references, as were Just Buttons Magazines

I collect bicycle buttons and these are a few of my extras..available under mixed materials @ Pegs Buttons
Posted by Peg at 12:39 PM No comments:

Button poem A victim of a Hobby

Email ThisBlogThis!Share to TwitterShare to FacebookShare to Pinterest
Labels: Button poem A victim of a Hobby 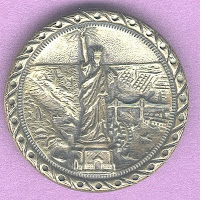 This is a scarce button..manufactured at the time of the unveiling ceremonies for the Statue of Liberty..which was 1886. The rope like border design complements the scene of New York Harbor, boats, bridge.
Posted by Peg at 4:48 PM 2 comments:

Email ThisBlogThis!Share to TwitterShare to FacebookShare to Pinterest
Labels: Statue of Liberty button 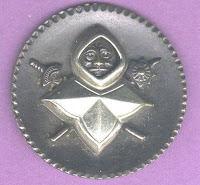 A religious subject button called Christian, from "The Pilgrim's Process" by John Bunyan
available in the METAL category
@ Pegs Buttons
Posted by Peg at 6:28 PM No comments:

What is a realistic? it is one which is made to magically become life size would duplicate the real thing. Here is a hankie and gloved hands. Made 1930's-50's. See under plastic category
@ Pegs Buttons
Posted by Peg at 4:57 PM No comments:

These buttons are pictured in the "About Buttons" button book by Peggy Ann Osborne..she quotes: The author is unaware of any commercially manufactured Beatle clothing buttons that show The Beatles themselves-probably because clothing buttons were not something their management thought to license, preferring to stick with items of broader interest to their teen audience. Still, one enterprising button manufacturer found a way to "cash in" on the mania without having to pay licensing royalties; these buttons, dating from their first American tour in 1964, have a rubus design-'beetle music' (look closely.) They were available in the 2 sizes.
Posted by Peg at 4:53 PM No comments:

Email ThisBlogThis!Share to TwitterShare to FacebookShare to Pinterest
Labels: The Beatles music Buttons 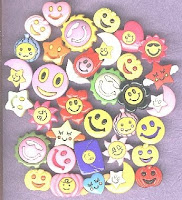 I collect smiley face buttons and here are some of my extras..see in the plastics category @
Pegs Buttons This group SOLD but I have others in my store.
Posted by Peg at 2:54 PM No comments: