The Pot of Basil button 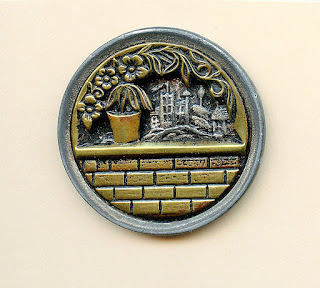 Isabella, or the Pot of Basil (1818) is a narrative poem by John Keats, adapted from a story in Boccaccio's Decameron (IV, 5). It tells the tale of a young woman whose family intend to marry her to "some high noble and his olive trees", but who falls for Lorenzo, one of her brothers' employees. When the brothers learn of this they murder Lorenzo and bury his body. His ghost informs Isabella in a dream. She exhumes the body and buries the head in a pot of basil which she tends obsessively, while pining away
-----------------------
Isabella's brothers slay her lover: he appears to her in a dream, and shows her where he is buried: she privily disinters the head, and sets it in a pot of basil, whereon she daily weeps a great while. The pot being taken from her by her brothers, she dies not long after.

you can read the poem (which is lengthy here http://www.bartleby.com/126/38.html

Email ThisBlogThis!Share to TwitterShare to FacebookShare to Pinterest
Labels: The Pot of Basil button 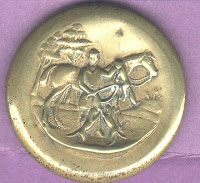 The Hermitage is 12 miles from Nashville, Tn. and was Andrew Jacksons home.
I had the pleasure of visiting the Hermitage in the 90's..I walked around the grounds and house in awe knowing I was walking on places he had walked..he and his wife Rachel had a love-match that never dimmed and her sudden death left him mourning his lost for the rest of his life. Rachel had a garden and they are both buried in the corner of this garden.
What does this have to do with the button I am showing?..the button came in a collection I bought from a women that lived a short distance from the Hermitage..it is a brass sporting button, she had it labeled "Andrew Jackson and his horse Patch" so I am wondering if she did indeed know this button or not?
Does anyone else have this button?
Posted by Peg at 7:08 PM 4 comments:

The Seven Immortals, or gods of fortune. Arita porcelain from Japan.
These were sold as a boxed set by Toshikane Art Porcelain, Tokyo, during the 60's. Although modern, they are quit fine. Click on picture to enlarge.
This set is available in my ecrater button store under the ceramic category @
Pegsbuttons
Posted by Peg at 8:55 PM 2 comments: