Dix. I clear and colored glass and black glass
Aventurine: Usually referred to as GOLDSTONE. Aventurine was discovered by chance about 1810 and manufactured for a long period at the glassworks of Murano, Italy. The gold iridescence of the glass is caused by a crystalline separation of metallic copper from the mass, colored brown by peroxide of iron. The molten glass was allowed to cool slowly to facilitate the formation of crystals. Trapped air formed bubbles, which help to reveal the true character of the goldstone. Frequently, the polished surface of the finished product is pitted where the polishing cut through air bubbles.
above information is from the book “The Collector’s Encyclopedia of Buttons” by Sally Luscomb 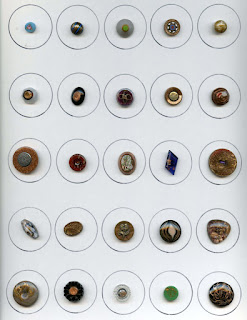