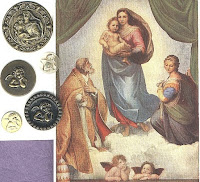 Postcard showing Raphael's painting of the Madonna in the Sistine Chapel.
The large button is one piece brass with border of winged cherub heads and stars..the 2 larger pensive cherubs are also brass..those 3 buttons are antique..the 2 small buttons are modern.
Click on picture to enlarge.
Merry Christmas and Happy New Year
Posted by Peg at 7:24 PM No comments: 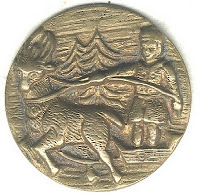 Its beginning to look a lot like Christmas in my part of Idaho.
Sure thought I spotted Rudolph and Santa!!?
Alas..tis not..upon further investigation the name of this button is "Laplander Driving a Reindeer " antique, brass
Merry Christmas!
Posted by Peg at 12:27 PM 1 comment: 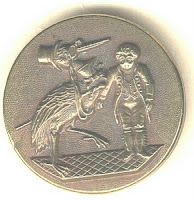 The stork is wearing top-hat, ribboned glasses and carrying cane advances with dignity as the butler announces him.
-------------------
from the big book of buttons
"A beautifully detailed button of stamped brass. Children must have recognized these characters instantly in the 1880's but the identity of the story is not known at present."
I did a little research and couldn't find anything about this story..the button is antique and scarce.
Posted by Peg at 3:27 PM No comments:

Fable button The Ant and the Grasshopper 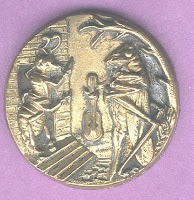 The Ant and the Grasshopper, also known as The Grasshopper and the Ant or The Grasshopper and the Ants, is a Aesop fable providing a moral lesson about hard work and preparation.
The fable concerns a grasshopper who has spent the warm months singing away while the ant (or ants in some editions) worked to store up food for winter. When winter arrives, the grasshopper finds itself dying of hunger, and upon asking the ant for food is only rebuked for its idleness. The story is used to teach the virtues of hard work and saving, and the perils of improvidence. Some versions of the fable state a moral at the end, along the lines of: "Idleness brings want", "To work today is to eat tomorrow", "Prepare for want before it comes".
There are many versions, here is one.

In a field one summer's day a Grasshopper was hopping about, chirping and singing to its heart's content. An Ant passed by, bearing along with great toil an ear of corn he was taking to the nest.
"Why not come and chat with me," said the Grasshopper, "instead of toiling and moiling in that way?"
"I am helping to lay up food for the winter," said the Ant, "and recommend you to do the same."
"Why bother about winter?" said the Grasshopper; we have got plenty of food at present." But the Ant went on its way and continued its toil. When the winter came the Grasshopper had no food and found itself dying of hunger, while it saw the ants
distributing every day corn and grain from the stores they had collected in the summer. Then the Grasshopper knew:
It is best to prepare for the days of necessity
Posted by Peg at 12:00 PM No comments:

Email ThisBlogThis!Share to TwitterShare to FacebookShare to Pinterest
Labels: Fable button The Ant and the Grasshopper
Newer Posts Older Posts Home
Welcome to my button blog