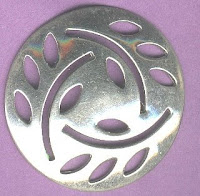 Swedish-Modern was primarily a decorative-arts style--only to a much smaller degree a fine-arts style...which is associated with Swedish furniture design. It epitomized minimalistic sophistication, and for several years the entire home-decor industry was under its influence. Various graphic arts were also widely involved.
Representational art from this period was drawn in a simple, clean-lined, almost child-like manner and color was kept to a minimum. But whether a conventional design, or pictorial theme, the look was rather stark.
During the late 1950's and early 60's, when the influence of this style monopolized the decorative arts, buttons were not in fashion and manufacturers produced few of interest. Nevertheless, a dedicated collector will be able to find buttons from this era that reflect the Swedish-Modern style.
THE BUTTON: A modernistic button design of aluminum
Above information is from the About Buttons book by Peggy Ann Osborne
Posted by Peg at 3:38 PM 2 comments: 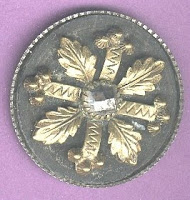 Archaeologically-styled decorative-arts products were made to copy the look of Etruscan and Hellenic jewelry from the 7th to 3rd centuries B.C. Sun signs, animal heads, wreathes, and broad, flat leaves were among the usual motifs.
In ancient times, the goldsmiths of Etruria (now western Tuscany, Italy) were greatly admired for their technical mastery and artistry in gold-work, especially the technique known as granulation--the affixing of decorative trim made up of tiny gold beads to a gold surface.
The archaeological digs of the early nineteenth century yielded examples of this work, which had until then never been seen by modern metalsmiths. The gold-granulation decorative process had been lost, but Roman dealer and jeweler Fortunato Castellani sought to revive the styles, motifs, and artistry of such pieces. He did indeed discover the long-lost methods, and his copies became world-famous, the definitive modern reproductions of this ancient technique; the process is now often just referred to as 'Castellani-style'.
THE BUTTON: The steel-bodied button has an Etruscan escutcheon over a wooden background, although the center motif is Neo-Classic style. There are also a few important additions typical of the Etruscan style: the balls at the base of each radiating brass strip, this particular leaf shape, and the zip-zag pattern on the flat brass strips.
Above information is from the About Buttons book by Peggy Ann Osborne
Posted by Peg at 5:43 PM No comments: 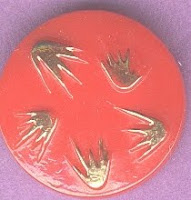 Surrealism is an elemental art style, derived from Cubism but relying on fantasy, including the absurd, the incongruous, the weird, and occasionally the morbid. It never had the impact on the decorative arts that its fame since would imply. Surrealism was almost entirely limited to the most radical element of the fine arts community; thus buttons with motifs that can be called Surreal are very rarely found.
Surrealism was as much an exercise of intellectual freedom as it was a fine art. Its philosophical leaders, such as Germany's Max Ernst and Spain's Salvador Dali and Pablo Picasso, intended it to be free of every normal aesthetic and moral limitation.
"The object was to free artists from all accepted means of expression, so that they might create according to the irrational dictates of their subconscious mind and vision."
It is difficult to fit Picasso into any one style of art because of his forays into many styles, including Expressionism and Cubism as well as Surrealism, but there are buttons that very closely resemble his work.

The above BUTTON: One of the themes common to Surrealistic art was the disembodied hand. Unlike the hand images prevalent in the Victorian era, the Surrealistic hand was mystical, quite unconnected to even an unseen body, and vaguely disconcerting or threatening. This small West German glass button with stylized hands was made during the mid-1950's
Surrealism information is from the About Buttons book by Peggy Ann Osborne
Posted by Peg at 4:08 PM 2 comments:

Art Deco was a popular international art design movement from 1925 until the 1940s, affecting the decorative arts such as architecture, interior design and industrial design, as well as the visual arts such as fashion, painting, the graphic arts and film. At the time, this style was seen as elegant, glamorous, functional and modern.
The movement was a mixture of many different styles and movements of the early 20th century, including Neoclassical, Constructivism, Cubism, Modernism, Art Nouveau, and Futurism. Its popularity peaked in Europe during the Roaring Twenties and continued strongly in the United States through the 1930s. Although many design movements have political or philosophical roots or intentions, Art Deco was purely decorative.
Art Deco experienced a decline in popularity during the late '30s and early '40s, but experienced a resurgence with the popularization of graphic design in the 1980s. Art Deco had a profound influence on many later artistic movements, such as Memphis and Pop art.
Surviving examples may still be seen in many different locations worldwide, in countries as diverse as China (Shanghai), United Kingdom, Spain, Cuba, Indonesia, the Philippines, Argentina, Romania, Australia, New Zealand, India, Brazil and the United States (primarily in Miami, Los Angeles and New York City). Many classic examples still exist in the form of architecture in many major cities. The Empire State Building and Chrysler Building, both in New York City, are two of the largest and best-known examples of the style.

I have MANY art deco buttons available@Pegs Buttons
Posted by Peg at 3:09 PM 2 comments: