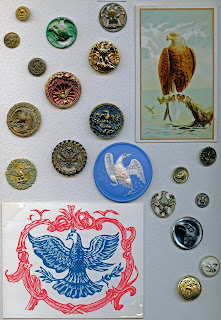 The Eagle
Many centuries before it became an emblem of the United States, this bird had been accepted as the symbol of St. John the Evangelist. John's spirit is said to be like the eagle's in its soaring flight to the throne of God. The evangelist mentions the eagle several times in the Apocalypse. One passage is of particular interest because it includes the symbols of all four evangelists:..and around the throne, are four living creatures, full of eyes before and behind. And the first living creature is like a lion and the second like a calf , and the third has the face, as it were, of a man, and the fourth is like an eagle flying"
Locally, the eagle is also a symbol of Boston College (Pilot Drawing by Ronery
click on image to enlarge
Posted by Peg at 5:10 PM No comments: