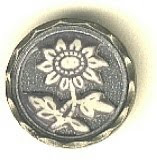 A legend of the Daisy flower.
The Daisy has long been a favorite in love stories-most of us recite-"One I love, two I love, three I love I say"-etc.
They say "Daisies never Tell". This emblem of fidelity is said to have sprung from the tears of the Virgin Mary.

The antique button is brass with ivoroid design..available as are many other flower buttons @Pegs Buttons
Posted by Peg at 1:51 PM No comments: 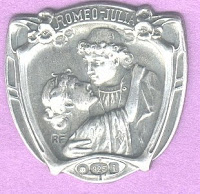 Romeo and Juliet is a tragedy written early in the career of playwright William Shakespeare about two young lovers whose deaths ultimately unite their feuding families. It was among Shakespeare's most popular plays during his lifetime.

Button is one piece hallmarked silver..not for sale.
Posted by Peg at 3:47 PM No comments:

Email ThisBlogThis!Share to TwitterShare to FacebookShare to Pinterest
Labels: Romeo and Juliet Button

Cupid is working overtime preparing for tomorrows big day..he is sharpening his arrows and forging the links of matrimony.
Happy Valentine Day
Antique buttons..brass,the largest has a wood background..notice the lovebird watching.
Posted by Peg at 12:06 PM 2 comments: 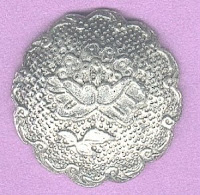 LEGEND OF RED ROSE
Venus was a beautiful Goddess, gracious and charming. She symbolized love between man and woman. Her altar was always heaped with roses, which were her favorite flower. Venus had many lovers, among them a shepherd boy named Adonis. When he lay dying of the wounds inflicted by a wild boar, Venus ran to his aid and in her haste, pricked herself on some white roses that were in her way. They were so ashamed because they hurt her that they turned red. Thus, the red rose has been the symbol of lovers the world over.

I am not sure if the button is antique or vintage, it is one piece silver colored metal with a longer loop shank..NICER & BRIGHTER than my picture shows..available under the PLANT LIFE category @ Pegs Buttons
Posted by Peg at 8:40 PM 2 comments:

Valentine's Day or Saint Valentine's Day is a holiday celebrated on February 14 by many people throughout the world. In the English-speaking countries, it is the traditional day on which lovers express their love for each other by sending Valentine's cards, presenting flowers, or offering confectionery. The holiday is named after two Early Christian martyrs named Valentine. The day became associated with romantic love in the circle of Goeffrey Chaucer in the High Middle ages, when the tradition of courtly love flourished.
The day is most closely associated with the mutual exchange of love notes in the form of "valentines". Modern Valentine symbols include the heart-shaped outline, doves, and the figure of the winged CUPID. Since the 19th century, handwritten notes have largely given way to mass-produced greeting cards.
from Wikipedia encyclopedia

I have the above buttons and some others for sale under the Holiday category @ Pegs Buttons
Posted by Peg at 3:39 PM No comments: